Councillors and the WDC members shared details of the most urgent needs and concerns regarding the development of the island. Issues highlighted during the meeting include difficulties arising due to space scarcity and concerns regarding the pace of the land reclamation project, contracted to Maldives Transport and Contracting Company (MTCC). Councillors appealed to the President to initiate a housing project upon the completion of the land reclamation project. They also conveyed concerns from the resident population on the situation of coastal erosion occurring on the island, the need for harbour expansion, increasing the Health Centre service to 24 hours and the establishment of a Youth Centre. The WDC also stressed the need to establish a handball court and an outdoor gym facility during this meeting.

President Solih shared the latest updates on the progress of projects undertaken by the government on the island. He said that efforts are underway to increase MTCC’s capacity and that groundwork of the land reclamation project is expected to begin late next year. He stated that funds would be allocated in next year’s budget for the construction of the six classrooms and a multi-purpose hall for the local school. The President revealed that the government will find a quick temporary solution to the coastal erosion problem faced by the community and the establishment of the water and sewerage network project will resume in November. He also revealed that funds would be allocated in the upcoming year’s budget for the establishment of a handball court, outdoor gym and children’s park on the island.

President Solih officially inaugurated the newly-built island mosque ahead of his meeting with the island council. The government spent MVR 4.44 million to develop the contemporary mosque, which caters up to 300 worshippers at a time. He also went to the site of coastal erosion on the island and visited and enquired about the situation of the Island’s Health Centre and Magistrate Court.

Bodufolhudhoo Island is the President’s fifth destination on his current two-day trip to six islands of North Ari Atoll. President Solih is accompanied on this trip by a delegation of cabinet ministers and senior officials from the government. 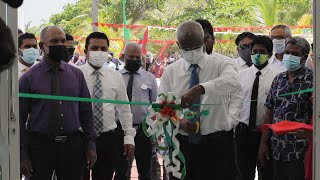 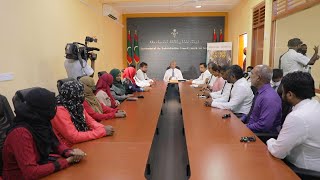 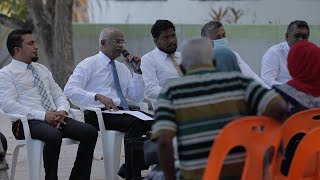