President Ibrahim Mohamed Solih has met with the North Ari Atoll Himandhoo Island Council and Women's Development Committee (WDC), this evening at the Secretariat of the Himandhoo Island Council. Speaking at the meeting, President Solih stated that several development projects had been carried out on the island and that the government intends to commence several more projects in various developmental capacities which would comprise almost all sectors.

Speaking at the meeting, members of the Himandhoo Island Council conveyed the most urgent developmental needs relevant to the island and relayed the concerns of the island community to the President. Some key issues highlighted at the meeting include concerns regarding the harbour and jetty, coastal erosion, lack of laboratory facility at the health centre, lack of access to banking services, the need for an additional mosque, the need for a police station and a youth centre on the island. Councillors conveyed the need for the multi-purpose hall and classroom development project to be initiated at the earliest. They also expressed the difficulty faced due to the lack of staff at the council secretariat and raised their concerns regarding the council budget. The WDC thanked the President for the recent wage increment brought to WDC members by the administration. They appealed to the President to establish an indoor gym on the island.

President Solih briefed the councillors on the latest updates of the developmental activities planned and of those currently being implemented on the island. In this regard, he detailed that the harbour project had been completed and inaugurated today and that the government will work towards resolving the issue of coastal erosion on the island. The President also highlighted that efforts are underway to further develop the youth centre on the island and that he would try to include an indoor gym at the youth centre. Additionally, he stated that a police outpost will be established on the island under wider plans by the police service to establish their presence across the country. He added that the school expansion project, to build a multi-purpose hall and 12 classrooms, is at the awarding phase and that efforts to establish a new mosque, with 300 worshippers capacity, is underway.

Himandhoo Island is the President’s final destination on his current two-day trip to six islands of North Ari Atoll. President Solih is accompanied on this trip by a delegation of cabinet ministers and senior officials from the government. 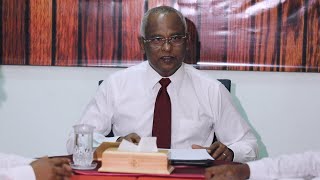