President Ibrahim Mohamed Solih has said that the government has drafted a bill aimed at fostering patriotic young people who love and respect the principles of Islam. He made the statement while officiating the ceremony held at Kulhudhuffushi City tonight to mark the National Youth Day.

Speaking about the bill, President Solih stated that another purpose for proposing the bill is to cultivate and nurture responsible and productive citizens. Highlighting that guiding youth towards achieving their aspirations and facilitating prospective opportunities for youth are also among the reasons why the government proposes the bill, President Solih said that he anticipates the bill to pave the way for meaningful contributions towards the progress of the nation.

Emphasizing that the government will initiate a nationwide mega housing project funded by the government worth MVR 1.2 billion, to alleviate the housing situation across the country within the next two years, the President said that 400 of the housing units within its first year’s allocation would be reserved for Kulhudhuffushi City. Additionally, he expressed his delight in announcing that negotiations with a foreign party to develop an additional 1000 housing units in Kulhudhuffushi City, has now been completed.

President Solih presented the awards to the winners of this year’s Youth Awards.

The 10 individuals who received the Youth Awards tonight are:

The Youth Award is an award presented to individuals to recognize and encourage youth for their invaluable contributions to the development of youth in various sectors. The award recognizes the important role played by youth in national development and encourages youth to be productive and responsible for the benefit of society.

After the ceremony the President also attended a music show hosted to mark the National Youth Day. 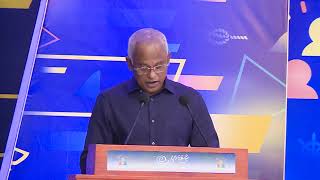