President Ibrahim Mohamed Solih on Wednesday met with the members of the island council and the Women's Development Committee (WDC) of Dhidhdhoo Island in Haa Alifu Atoll. The meeting was held this morning at the Haa Alifu State House in Dhidhoo Island.

At the meeting, the council members noted that numerous developmental projects have been initiated on the island by the administration, with many projects still ongoing. They also highlighted their most pertinent needs, which include improving the services at the H.A. Atoll Hospital located on the island; rectifying space constraints in the Haa Alifu Atoll Education Centre; and finding a permanent and sustainable solution to the waste management problem on the island.

To address the space constraints at the Dhidhdhoo Council Secretariat, the members proposed using the budget allocated to the council to develop the premise of the office. The discussion also focused on issues regarding council jurisdiction and other financial matters relevant to the island council, such as allowing the council to collect fees for vehicles registered in the constituency.

The members of WDC conferred their concerns to the President as well. They highlighted the administrative challenges; the lack of specialised healthcare for women; and the need for exercise and fitness equipment on the island.

Speaking at the meeting, the President assured the members that he would address the issues with the relevant stakeholders, including allowing the council to collect fees from vehicles registered in their constituencies. He also noted that waste management services were being developed on Kunburudhoo Island, which would ease the issue of waste management on Dhidhdhoo Island as well.

As the administrative island of the Haa Alifu Atoll, many developmental initiatives have been carried out on Dhidhdhoo Island. Some developmental projects are still underway, including the development of the harbour, hospital, junior college, and Islamic Centre. 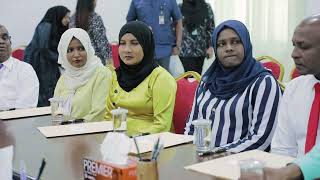 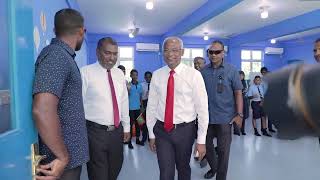